Out of the Park 20 Review - Scouting the Stats

May 02, 2019
Out of the Park is the best simulation baseball game out there each and every year. It gets critical acclaim from everyone who reviews it and it is always improving. You can read how great the game is anywhere. You can't find analysis like I do with prospects.

It has been years since I've really torn into the game with analysis. I decided to do something a little different than a standard review this year.
What I did was ran a 5-year simulation. I exported the stats after the 2023 season and ran an analysis on them. I also ran the same analysis on the 2018 stats in the game for a control set.

I broke down the data by year of birth and position. I ranked them based on a proprietary formula which gives each player a 20-80 score. That is the "O" column. The % column is a percetage of likelihood the player will make it to the majors based on his skillset and similarly productive players. The "P" column is the players skillset. I did not print this portion, as it needs deeper explanation and will be a seperate article written at a later date. The "L" column is the highest level the player achieved during the simulation with 0 being MLB, 1 is AAA all the way down to 6 for Rookie League.

Below is the 19 year old class, those born in 1999. The column on the left is a list of many of the better prospects in baseball. Many of them reached the majors over the 5-year simulation. If you were to start a franchise, trading for all some of the players in the left column would be a good recommendation to create a "wave" of talent. If you have an aging franchise, picking a handful of these guys to trade for would be a good way to boost your farm system. I didn't analyze the in-game prospect list to see if they are similar but I'm confident that if you look at each of the ages, from 17-25, most of the best prospects will be listed.

Below is an exerpt. Here is the entire 2018 breakdown. 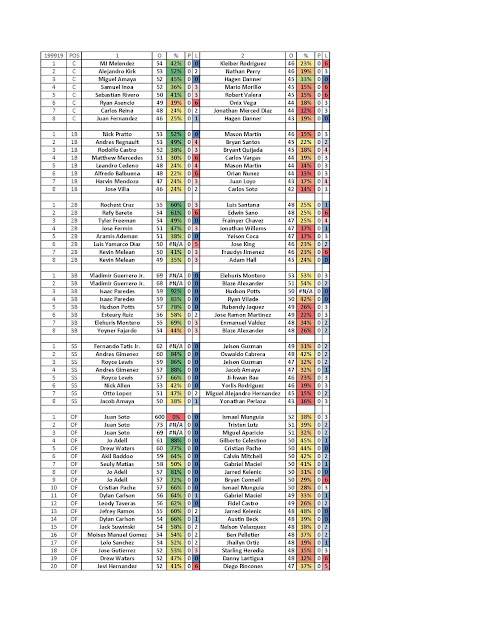 To compare, here is a list of the best players in MLB using the same system based on the 2018 season.
Fans of La Tortuga rejoice! 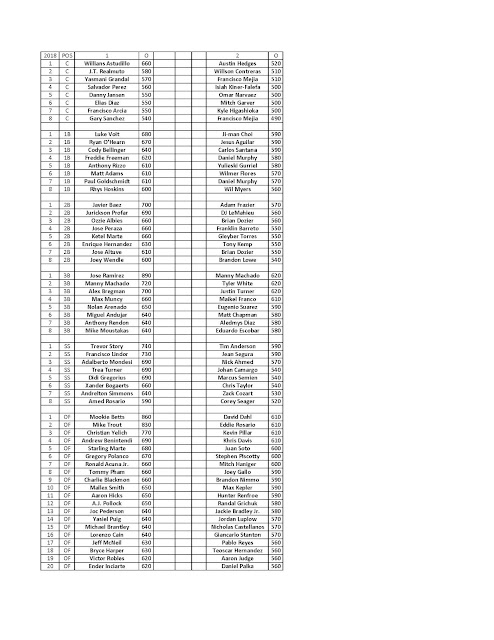 It's not perfect but I'm not aiming for perfect, I'm looking to isolate the prospects I should know from the massive group of players that are in the minors.

Ok, now for the fun part.

A few things jumped out at me. Players were SLOW to make it to the majors. Even the best weren't flying through the minors. Here is an excerpt showing the 19 year olds, similar to the one listed above, just 5 years later. 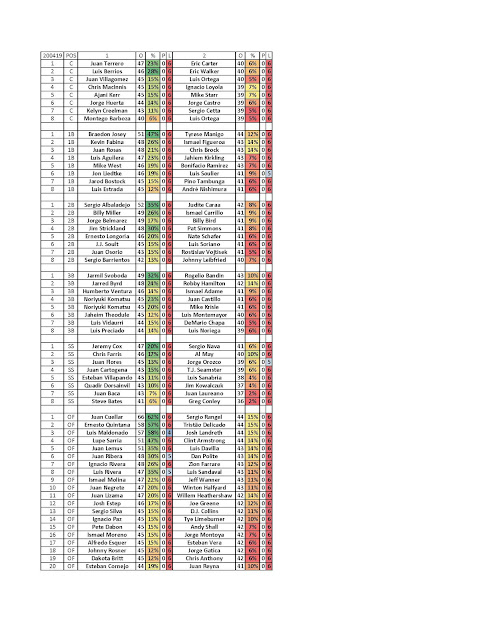 There were an odd number of created players. There seemed to just not be many good 16-17 year old at all and not many 18 year olds. The game seemed to be short on players all around, especially good young ones. I dug into this a little. There is literally only one 18 year old SS in 2023. One. That's mind-boggling. There were only 26 outfielders. There should be at least 40 from this age class that will make it to the majors. Having only 26 is a large flaw. That will not produce a representative class. Maybe other sims wouldn't do this but that is largely out-of-whack with baseball over the last 20-30 years. That causes a low number of players to make it to the majors early as well. 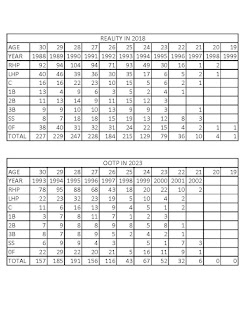 This may regulate after a few more years but it is a big hole in the ratings, progression or available players in the pre-loaded roster and how it melds with the created players in the game.
I may simulate further and do this again to see if this is a pre-loaded roster issue or a glitch but either way, it's a giant hole in realism in an otherwise sound game.

Players are also slower to be called up to the majors. There is about half the amount of 24 year old in 2023 as there is in 2018. There are 15 players in the majors that are 21 and under in 2018 but only 6 in 2023 and none under 21. Most of the best 20 year old prospects have yet to advance past rookie ball. Another thing to dig deeper into, but this is just confusing.

This shows that the better way to play the game is with players that already are succeeding in the majors and not prospects but the game represents all the levels.
This is counter-intuitive to what I expected. I expected the prospects to be over-powered and it is actually the opposite.

Most of the best 20 year old prospects have yet to advance past rookie ball. Maybe this is due to a weighting problem in my algorithm or maybe it's the game. Another thing to dig deeper into, but this is just confusing.

This makes me wonder if the game is producing enough players each year or if there are holes. I'd have to dig further into this as well, as I don't have adequate data to verify this from my simulation and would have to run another to get what I need. This may also be real roster related, more than game creation related but, again, is a hole that I did not expect.

Out of the Park is an astounding achievement but it is not a perfect game. I hope to see it continue to grow and improve in many facets and this is one of them.

For good measure, here are the best players 26 and over after the 2023 season, in case you want a cheat sheet for your franchise. 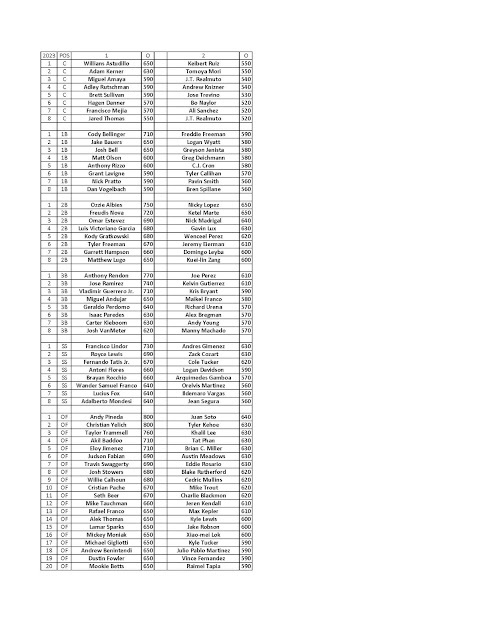 What all of this means is that if you are a Willians Astudillo fan, and not an owner of OOTP20, you need to rectify that immediately.

If you have questions or comments feel free to find me on Twitter: @mattgarrioch